Pam was a 62-year-old female with pancreatic cancer who first came in due to abdominal pain and distension. She said she was diagnosed with pancreatic cancer this past January and was going through chemotherapy. She was admitted to the hospital because her abdomen was the size of a beach ball. Several family members were with her at bedside. Although Pam looked weak, she was laughing and making jokes with her family. In fact, she jokingly remarked “Doctor, I look like I’m pregnant!”  I asked her if her husband knows. She asked me, “Know about what?” I pointed to her stomach and said, “the baby.” She broke a smile and the other family members in the room sheepishly chuckled. I told her we were going to run some tests and figure out what’s going on. 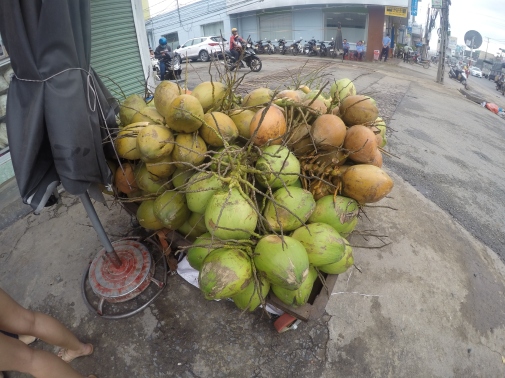 Coconuts in Bien Hoa, Vietnam. Imagine a really big one of these in your belly. That’s probably how Pam felt. 5/12/16.

Turns out that Pam’s pancreatic cancer has grown in size, essentially blocking part of her portal system (blood vessels running through the liver) causing a congestion of blood flow, spilling into her intraabdominal space. Something common in pancreatic cancer, but often a very poor sign. We ended up draining the fluid. After adjusting her pain medications and making sure she did not have any infection, I set out to discharge her. Before she left, I asked if she wanted to continue chemotherapy. She told me that it was hard, but she wanted to give it a shot. She told me she has excellent family support and had a strong will. She left.

Example diagram of Pam’s cancer. Notice how the cancer is blocking the Portal Vein causing congestion and eventual leakage of fluid into the abdomen.

When Pam left, my attending pulled me aside and told me about a little bit more about her. She’s been in and out of the hospital over the past 3-4 months since she was diagnosed with pancreatic cancer. Always the same issue. Her abdomen blew up to the size of a huge watermelon, the doctors drained the fluid, and sent her home. As you can see, this problem will always occur unless you get rid of the pancreatic cancer. Unfortunately, you can’t just cut it out, and there aren’t many targeted chemotherapies that are effective against the type Pam has. My attending added that this last hospital visit Pam seemed considerably weaker since he saw her in March. He wasn’t sure how much longer she would last.

The following week after Pam left the hospital, I went down to the emergency department to admit a new patient. Low and behold, Pam was lying in bed with a beach ball abdomen. She was in more severe pain. We ran through the same routine of draining her abdomen and increasing her pain medications. I asked her if she wanted to continue chemotherapy. She told me this:

“Well my oncologist told me that with my type of cancer, I have about 2 months left. Every time I went for chemotherapy, I felt really sick.I felt crappy and stuck in a room. I’ve decided that I don’t want to go through chemotherapy anymore. It’s not fair to my family and it’s not fair to me. I want to go out and live my last two months doing what I want to do. Eat what I want to eat. Enjoy my time with my family.”

Pam’s sister and close friend were at bedside. Their heads were turned away. In the corner of my eye, I saw some tears and heard some sniffles. Pam, however, had that same crooked smile on her face. A smile that has withstood the numerous ins and outs of the hospital. The smile was worn down from the many days of  chemotherapy related nausea and fatigue. A smile hardened through the battle of cancer that ultimately will win, if there ever was a winner or loser. She still smiled none the less.

Pam was discharged that day to home with hospice. She would no longer go through chemotherapy. She would have a nurse come to her house everyday and she would be given enough pain medication to manage the pain. When she left, I knew she had a tremendous support system, because almost ten family members were there in the room to pick her up. I’m only left to wonder what will happen to her, but I can move on knowing that she made the right decision. That she will live the rest of her life surrounded by loved ones, in her comfortable home, and likely passing on peacefully in her sleep.

Why I want to be an oncologist.

During residency, newly minted doctors often have to come to a decision on what to choose to do after training. Some become hospitalists, others become outpatient primary care doctors, and even others can go on to further training programs and subspecialize. I am choosing to become a cancer doctor.

As an oncologist, I’m sure I’d meet many patients like Pam. There are going to be many losses, but at the same time there will be many wins. When people wonder why certain doctors are attracted to certain fields, it’s usually one of three reasons.

One reason is just because they are interested in that scientific field. We study a lot.  And with that studying, there may certain subjects or areas in medicine that may seem more interesting than others. Oncology has come a long way since its humble beginnings. In the biography of cancer, Dr. Mukherjee described how the only cure for cancer back in the 1400s was to cut the tumor out and hope for the best. Now we have small pills that can target cancer specifically with relatively few side effects and extend life. I hope that in my lifetime, cancer will just become another chronic disease such as hypertension and diabetes. Cancer will become something you live with, not die from, and that’s exciting.

Another reason why doctors want to be oncologists is because of an inspiring role model or mentor. Medicine is very mentor-apprentice based, as we often times work with someone more experienced than we are to learn their craft. In medical school, you work with the resident physician. As a resident you work with the attending. Even as an attending, you continue to go to conferences and listen to speakers, read the latest research articles, or even find mentorship at work with more experienced physicians. For me, I met and have a great mentor at my residency. His enthusiasm for oncology instilled fire in me. Also he showed me that medicine is more than just giving the right drug to the right person. It’s the bedside manners, the relationships, the communication, the empathy. Medicine is an art, and he was an artist to emulate.

The third reason, and this reason carries the most weight for me, is the patients. During my first year of residency, I was lucky to have an elective rotation in hematology oncology in the first few months. I’d see patients like Pam nearly everyday. When faced with cancer or terminal illness, I feel that I often see the true soul of people. I see how certain people react to hearing the diagnosis. I feel the fight of patients with terminal cancer during their challenging chemotherapy sessions. As an oncologist in training, I was able to share intimate moments with both the family and the patients. In a sense, as an oncologist, you become part of the family. You live with them in the trenches of painful chemotherapy sessions. You rejoice in glee when a cancer has been in remission for the past 4 months. I want to keep meeting patients like Pam, doing everything I in my power to help them, whether it be another shot at stopping the cancer versus deciding to go for a more palliative, comfortable route.

The Art of Dying.

A lot of the reason why I started this blog is that I feel the stories I hear from my patients are inspiring in their own right. I feel that it is my duty to share their life lessons with the world (not to break in HIPPA rules of course). These lessons and stories are ways of spreading knowledge and inspiration in a relatively efficient and easy to access way. One of these lessons was taught by Pam and how she chose to spend her remaining days.

The Ars moriendi is a protocol on the procedure of having a good death. Translated into “The Art of Dying,” it was used in the late Middle Ages by Christians after the Black Death. The Black Death resulted in almost 200 million deaths in Europe. In the late 1300s, it was spread by sewer rats carrying the bacterium, Yersinia pestis. Since the European Christians were so used to death, they created the Ars moriendi to guide others in dying peacefully and gracefully. The book emphasizes that dying has a good side and is not something to be afraid of.

Don’t be afraid of death.

I feel that western medicine has instilled a feeling that there are winners and losers in disease. If you died, then you lost. We have come a long way with the advancement of medical technologies, therapies, and treatments. What we might have forgotten is that there’s always going to be an end to everything, even life. That’s the common aspect that we all have. Not to be so grim, but we all will die one day. Steve Jobs talked about death being life’s greatest creation. It’s the catalyst that pushes us forward. So instead of wasting time on fearing the end of life, we should embrace it. Live each day like it was your last. Make your voice heard. Fight for your dreams. Take the shot and make it count. In reality, life isn’t just about winning and losing. But if it was, the only winners are the ones who live.

Take the leap! Kari and I jumping in Taal Volcano, Philippines. The volcano is active! 5/28/16.

14 thoughts on “Beach Ball Abdomens, The Ars Moriendi, And Why I Want To Be An Oncologist”